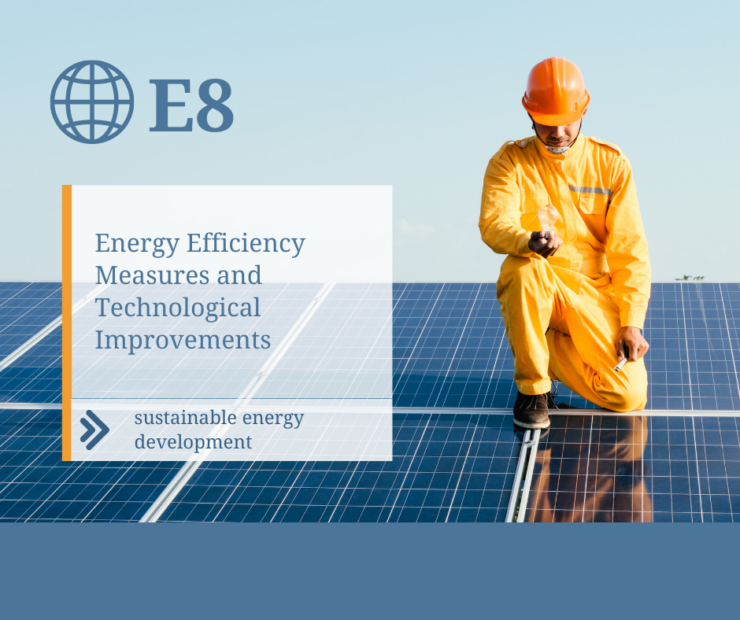 Conversion plan to CCGT and clean coal technologies: a path towards energy efficiency

Enel is completing a plan to convert its oil-fired power plants into both CCGTs and very efficient coal-fired plants.

With reference to the CCGT plan, as of December 2004, the total capacity of ultra-high efficiency (55%) natural gas-fired combined-cycle plants exceeded 5,000 MW. This capacity will grow by another 1,100 MW within 2007.

The conversion of the original conventional oil-fired power plants will cut specific CO2 emissions by over 50% and reduce SO2 emissions practically to zero.

The table below compares the oil-fired power plants with the CCGT and shows the benefits of the latter.

In order to safeguard the security of fuel supply and lower the cost of electricity, Enel also started, in 2004, the conversion of about 4,000 MW of oil fired power plants into coal-fired power plants.

Enel adopted the ’clean coal technology’, that delivers the same quantity of electricity by burning less coal, thanks to optimization of thermodynamic cycle (Rankine cycle) and use of new equipment and materials: that enables, inter alia, the reduction of CO2 emissions. Furthermore, the “clean coal technology” includes also both the desulfurization and denitrification systems to cut down on stack concentrations of SO2 and NOx. Bag filters, which are more efficient with respect to the abatement of thin particulates, are also installed.

In particular the new Enel coal-fired power plants will be equipped with :

The slight increase in CO2 emissions will be compensated by the sharp decrease coming from the CCGT conversions.

OPG is the largest consumer of its own electricity and improvements in energy efficiency offer significant opportunities for reducing operating costs, increasing productivity and profits, and enhancing environmental performance.

OPG has an established multi-year track record in internal energy efficiency. The company’s total cumulative energy savings since starting its energy efficiency program in 1994 are close to 3,000 GWh, with monetary savings of $124 million per year (@ 4.3 cents per kilowatt-hour) and annual emission savings of 2.9 million tonnes of CO2.

In 2004, OPG achieved internal energy savings of 107.4 GWh (equal to approximately two per cent of its internal energy use, which exceeded its self-imposed energy efficiency target of 45 GWh.

Since OPG does not sell directly to residential customers, its energy-efficiency programs are focused on large industrial customers, and advocacy, education and information programs. To encourage energy efficiency in the building sector, the company has sponsored the Healthy House Award to recognize the environmental benefits of home energy savings.

OPG works with an extensive alliance network to promote the wise use of energy. These stakeholders include Natural Resources Canada, major customers, and industry members of associations such as the Canadian Industry Program for Energy Conservation, Canadian Energy Efficiency Alliance, Alliance to Save Energy, Consortium for Energy Efficiency, American Council for an Energy Efficient Economy, and the Electric Power Research Institute.

The project delivered four times more light with 80% fewer lamps and 60% less energy consumption. Other benefits have included a brighter, safer workplace and lower maintenance costs. The energy savings over the life of the project are estimated at 60 GWh. 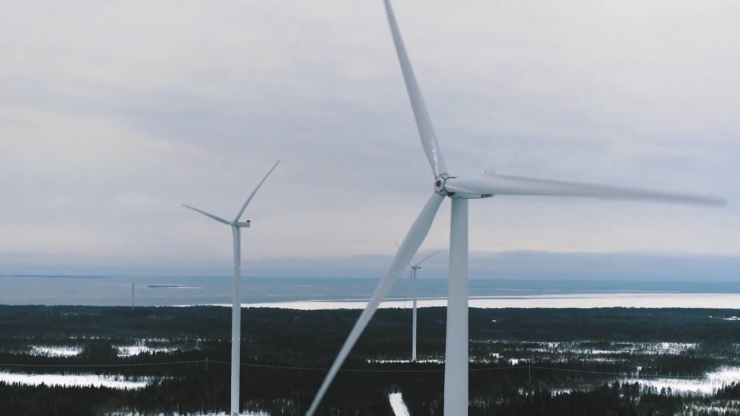 Nuclear improvements were largely in boiler operation (e.g., reduced boiler blow down) and generator operation. In Hydroelectric, many of the upgrades involved increasing capacity, and optimized conversion effectiveness through runner replacement.

Initially, there were many internal challenges to advancing energy efficiency. Barriers included energy use accounting, monitoring, awareness, and use of cost centers. To develop an effective and comprehensive program, OPG worked to address five factors :

OPG’s internal energy efficiency program was launched in 1994 with a target energy savings of 700 GWh over four years. Energy savings of 293 GWh/yr in the first year surpassed the original target by 67%. The annual targets now reflect more aggressive savings and projected business-planning results.

Lessons learned from the development and implementation of OPG’s Energy Efficiency program include :

** Contribution to be determined **

TEPCO has been striving to raise thermal efficiency while continuing technical development and improvements such as introducing combined cycle gas turbine (CCGT) generation and high efficiency coal fired plant. In FY 2004, TEPCO maintained the energy efficiency level of 41.9% (Higher Heating Value), weighted average of all the thermal plants of TEPCO. This high level is mainly achieved by the operation of efficient Advanced Combined Cycle (ACC) power generation introduced since the late 1980s.

The end result will be highly reliable, efficient and large-capacity power generation facility. The biggest improvement is that part of the combustor is cooled with steam and the turbine inlet gas temperature can be raised to 1,450°C. 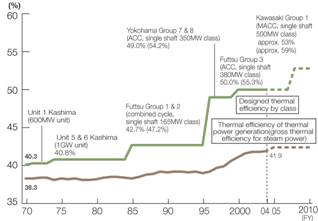 In addition to gas fired CCGT, TEPCO is also undertaking the improvement of cal fired plants. The Hitachinaka Thermal Power Station, which started its operation in December 2003, is Japan’s largest scale coal fired thermal power station, with an capacity of 1GW. It achieves a thermal efficiency of 43% (Higher Heating Value), the highest level for coal thermal and thus helping to reduce CO2 emissions.

In February 1996, the e7 initiated a project to help the Hashemite Kingdom of Jordan to improve the efficiency of its oil-fuelled electricity generating units. Completed in 2000, the project has reduced both greenhouse gas and acid gas emissions. Sustainable energy is one of Jordan’s priorities for its energy sector.

The host electric utility in Jordan, now known as the Central Electricity Generating Company (CEGCO), requested assistance3 from the e7 and agreed to register the project as an Activity Implemented Jointly (AIJ). CEGCO was concerned about heat rate and efficiency of its generating units. The Activity Implemented Jointly pilot programme was the precursor to the Clean Development Mechanisms and this AIJ project was one of the few completed worldwide.

Phase 1 included assessing the performance of the selected generating units and operating practices and training. It consisted of five tasks. The e7 provided the equipment needed to test the units.

Data collected as part of Phase 1 were used to define baseline performance. Changes to the operation of the units during performance tests and following the test programme resulted in an immediate improvement in unit performance and a reduction in air emissions. These changes included boiler tube wash at Hussein TPS and new air pre-heater seals at Aqaba TPS.

As the programme unfolded, CEGCO staff were eager to learn the procedures and technical skills required.

CEGCO carried out all the work that was within their skill capability, such as instrument installation, and they offered services to ensure that e7 support was efficiently used where their own skills were less developed.

The final audit of the project included interviews and reviews with operating staff to ensure that they could operate the new equipment and perform the performance monitoring. Results showed a high level of success and gave evidence that greenhouse gas reductions should be maintained and possibly even enhanced.

Following review of the results and recommendations from Phase 1 with CEGCO, the e7 and CEGCO selected three projects for implementation to make further efficiency improvements and reduce emissions at the Hussein Station. These projects were :

Results of the Project

Once the Phase 2 installation projects were complete, the total emissions savings resulting from the two phases of this project, estimated over a three-year period, are 141,983 Mg of carbon dioxide (CO2) and 3,420 Mg of sulphur dioxide (SO2).